Fans of Narcos and Breaking are in for a treat - Red Tiger's Narcos Mexico deals with notorious cartels. The sequel to NetEnt's Narcos is quite action-packed with Wild Supply Drops, Cartel Spins, and Double Cash. Find out more in our Narcos Mexico review. 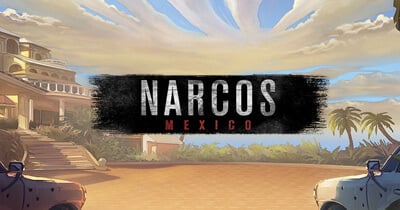 Red Tiger allows you to join the crackdown on the notorious cartels in a slot adaptation of the famous Netflix series – Narcos. You’ll enjoy matching combinations in the base game and the bonus rounds in this multi-payline high volatility slot. In this Narcos Mexico review, we’ll walk you through the action.

Before we get to the review, there’s something you need to know about Narcos Mexico. The first slot game inspired by Narcos was released by NetEnt, which became a hit. Following the success of Narcos (the slot), Red Tiger began working on Narcos Mexico and released it in March 2022.

Now that we’re familiar with the slot’s background, let’s jump into the review.

We’ll look at the key features and gameplay to give you a detailed review of this video slot. We’ll also inform you what to expect in the main game and what to look out for in the bonus rounds.

This game’s real money mode is even more fun as you can pocket winnings from the spins. To improve your experience, we’ve got attractive bonuses to play this slot.

To explore more reputed online casinos, you can check out our casino reviews.

Narcos Mexico is a high-volatility slot with an average RTP per industry standards. In this game, you’ll also recognize famous faces from the TV show on the grid.

The cartel bosses are the most rewarding symbols in this slot. In the bonus rounds, you also reap more rewards as they try to conquer more turf. On the other hand, regular playing cards with bold imagery are the least-paying symbols.

You don’t have to worry about burning through your bankroll too quickly. You can bet as little as $0.20 or comfortably place the $10 maximum bet. Using the autoplay option, you can also let the reels move continuously up to 100 times. This feature also has a loss limit that stops the spinning when you exceed the set amount.

If you’re lucky in this slot, you can have your winnings boosted by the 10,486x maximum win.

The base game in this slot is dull, with slow-paced action on the grid. However, multiple features light up the bonus rounds, boosting the game’s thrill.

When you land three Cartel Spins symbols on alternate reels (the first, the third and the fifth), you activate the main bonus game. The bonus game launches in a new 10×10 grid, where the four cartel leaders take positions in the corners.

Each of the bosses will try to claim more and more territory by marking the turf adjacent to them. The Cartel War begins when two rivals’ territories collide. The stronger boss will claim parts of rival’s territories, grow their influence, and win big.

The Cartel Connections has two features – the plane and the phone. When the plane lands on the reels, it boosts the multiplier value in adjacent territories by up to five times the stake value. Meanwhile, the phone symbol will double your multiplier when any of the cartel bosses picks up the phone to dial in favours. The Cartel Leaders can make a random phone call during the Cartel Spins.

You can activate a bonus gamble wheel when you win between 30x to 100x in this slot. The wheel has red and green parts; depending on where it stops, you can earn three Cartel Spins. You can also buy three Cartel Spins when you win 100x or more and pocket the balance. Red Tiger Gaming has put a new twist to the ‘Gamble Feature’ that many slot games have.

In the base game, a hovering plane can drop packages, which act as the wilds in this game. The wilds can substitute other symbols to form winning combinations.

Meanwhile, Double Cash happens when a Cartel Leader randomly calls and doubles your winnings after landing a winning combination in the base game or bonus rounds.

The theme of this slot is consistent with the TV show and the images are close replicas of the characters. The soundtrack also matches the theme song of the show.

Beat the Cartel for Big Wins

Narcos Mexico is a popular franchise slot from the popular Netflix show. To the developer’s credit, the graphics are sharp, and the extra details make the theme unmistakably clear. The soundtrack also makes this game hard to miss. However, the high-paying symbols have low multiplier values for slots in this day and age.

The base game rewards can be uninspiring for a high volatility slot, given the relatively low maximum bet. The Narcos Mexico slot scores a strong seven from its theme gameplay and features.